Okinawa is an insular prefecture at the south and west end of Japan, composed of 160 islands, including large and small islands, scattering within a sea area ranging 1,000 kilometers from east to west and 400 kilometers from south to north. Okinawa is the southern gateway to Japan located at the nearest from major Asian cities of Taipei, Shanghai, Hong Kong, and Manila, as well as Southeast Asian countries and the countries of Oceania. In addition, Okinawa is the only Japanese region that has a subtropical oceanic climate zone, and the islands are surrounded by a beautiful emerald green sea. The surrounding ocean area is a mine of biodiversity with one of the highest clarity levels in the world, where globally important coral reefs thrive. Every year, a number of tourists visit these islands, where the climate is warm and comfortable throughout the year, for the relaxed sense of time for recreation and healing. 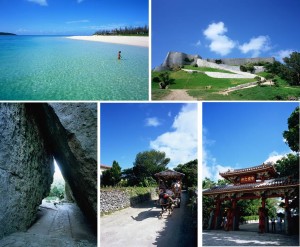 These islands are also well known as “the Longevity Islands.” Okinawa is one of the areas with the highest proportion of golden agers over 100 years per 100,000 population, an index of longevity, in Japan. In Okinawa, on the other hand, mortality rates for the three major causes of death, malignant neoplasms (cancers), heart disease, and cerebral vascular disease, are the lowest in Japan. Okinawa’s distinctive lifestyle supports this longevity, such as “nuchigusui (remedy of life)” based on the plentiful wisdom of ancestors, abundant cuisine culture with a concept of “medicine and diet from the same source,” and calm and generous spiritual climate, which are surely inherited at present.

In recent years, the Japanese government has promoted medical tourism as a part of its national strategy, while an original project has been advanced in Okinawa. In 2011, the Council of Bankoku Iryou Shinryo, based on a wish to serve as a bridge connecting Asia and the world via medical interactions, was established to start transversal efforts through cooperation between industry, academics, government, and the medical community. With the highest level of medical techniques in the world, which is an advantage of Japan, Okinawa has the originality and superiority in areas of medical checkup/screening, rehabilitation, and residential health therapy. The prefecture has a number of medical institutions specialized in multiphasic health checkup and screening, institutions with excellent rehabilitation care, and institutions providing a fusion of sport, fitness, and disease prevention clinics. Okinawa is also superior in developing human resources to support such medical services, and the numbers of doctors, nurses, physical therapists, occupational therapists, and speech pathologists per 100,000 people all exceed the average number in Japan.

Okinawa is also a place where integrative medicine, a combination of modern Western medicine, traditional medicine, and supplemental/alternative medicine, is being developed and practiced. Furthermore, Okinawa is the mecca of ocean therapy (thalasso therapy), a natural therapy where mental and physical healing effects are maximally exerted near this beautiful and clean sea. Okinawa has one of the largest ocean therapy institutions in Asia, and a deep seawater therapy institution with the second largest quantity of water intake in the world. The strongest and unique advantage of Okinawa is the capability to offer the world the highest level of medical practice and the fusion of medical services with integrative medicine, a warm and beautiful natural ocean environment, and encounters with the wisdom of longevity developed through its unique history and culture, combined with a tourism industry vigorously developing into the one and only resort destination in Asia.

We sincerely expect that you will experience care with abundant hospitality that can only be offered in Okinawa in the unique Okinawa Medical Resort tour.